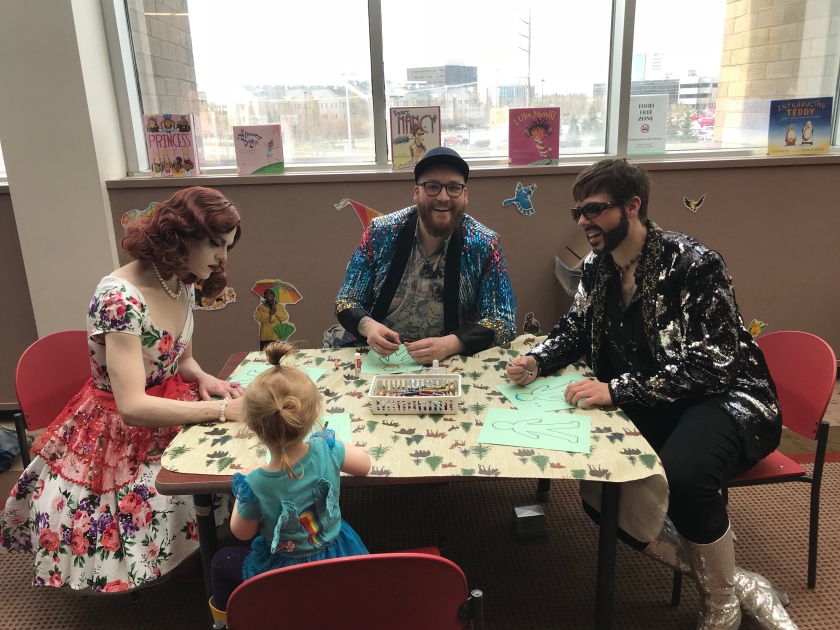 About two years ago, I wanted to get in on the Drag Queen storytime trend. However, I couldn’t quite get a drag queen to commit (I think I was asking the wrong people at the wrong time of the year). And so I filed it in the “someday” file. And then one of our new assembly members contacted me because he was in Juneau while they did their Drag Queen Storytime and wanted to know if we should do that. I said YES! And he put me in touch with the right people and the ball started rolling. Well kinda. It still took a year to fully come together.

In May, we held our first Drag Queen Storytime. We did it on a Saturday in the afternoon. Our normal storytime is Saturday mornings. This was for two reasons.
1. Drag Queen make up takes quite a while and they weren’t enthused about having it ready to go by 11am on a Saturday.
2. I have a policy about special/potentially offensive storytimes. They don’t happen during regular storytime blocks. No one should come to what they think is an innocuous toddler storytime and find Halloween, Christmas, Drag Queens, etc. I always put those things at a special time so families can choose to come/not come as they want. For the most part it works. People may grumble, but they’re usually really happy to have that choice. (Every year I get questions if we will read Halloween or Christmas books right before those holidays as many people don’t want one or the other for various reasons.)

Our first Drag Queen storytime in May went fantastically. We did minimal advertising (mostly a facebook event) and copartnered with Identity (our local LGBTQ advocacy group that among other things plans Pride) who shared on their social media streams. Our storytheater holds 75 people, we filled it and turned away another 20 people! We had one sort of grumpy comment online and one local right wing blogger picked it up and tossed it in her newsletter as a one line jab, but all the other coverage was great.

Here’s a fantastic news story from our local alternative press – with lots of photos.

Because May went so well, I didn’t go in on Saturday for the June Drag Storytime. (We have called it Drag Storytime because we have two queens and a king.) This storytime was also an official Pride event and drew another huge crowd (room capacity plus 30 people turned away, over 100 people.) Unfortunately this time, it didn’t go so smoothly. A self-proclaimed “street preacher” barged in and started yelling at the children. He was greeted by a loud chorus of NOOOOOOO from the audience. Immediately a few storytime attendees jumped up and started escorting him out firmly but politely. Our librarian was right there explaining he was violating policy.

And the Drag performers started singing louder than he could yell. There was a moment when everyone was booing and it could have turned ugly but immediately starting the singing redirected the energy. It kept it fun, it kept it focused on the storytime and the kids and the fun and joy that we came for instead of getting lowered into hate. It was a perfect redirect and our performers are amazing.

We did trespass (ban) him from the building. And we are not focusing on his message, but his behaviors. He broke several of our policies: filming minors without permission, harassing other patrons, religious proselytizing, going into a full library program, and failing to follow staff instructions. When we talk to members of the public, we are emphasizing that while we do not offer religious programming, we do support all of our community and that includes holiday displays for all major holidays (Christmas, Hanukkah, Ramadan, Passover, Easter, etc) as well of non-fiction and fiction materials with different perspectives including religious. Most of our spaces are rentable by the public and we do so frequently to religious groups.

Basically it was a horrible thing and handled perfectly by all involved. He was filming and had an accomplice inside the theater who was on facebook live. He’s put the videos on facebook, YouTube, etc and he keeps reposting them as he gets reported. I won’t give him the clicks because that is what he wants. But here is a video compilation from our local news station.

And just when I thought all the news story had played itself out. A facebook politics page picked it up and posted their own video. At the time of this blog post, it had 1.9 million views, 18,000+ shares, etc. And reposted and shared on twitter and all over the place. It’s in all my library social media streams. I never wanted to go viral, but I 100% stand behind this program. I don’t mix my personal and professional, but I am a lifelong Christian and a Sunday School teacher. Creating a welcoming environment for our entire community full of programs and collections that reflect all of our diversity will always be a priority and passion for me.

So that is the drama of Drag Storytime, but here are some of the mechanics. We prepared by meeting with the performers and emailing them a storytime outline plus a few of our favorite wiggle rhymes. We also sent them a list of really common children’s songs, ones they probably knew but might not bring to mind. (None of them are parents or work with small children so it is easy to forget how many children’s songs you know). With most storytime groups, if you just get them started, they’ll carry the song. And we pulled a ton of books for them to choose from. Here’s a brief list, most of them have direct LGBTQ+ themes, but some are just about acceptance or creativity.

Storytime books: (This is not a complete LGBTQ bibliography – there are lots of those around – but more a storytime friendly list. Target age 2 to 5 with their families.)

Fancy Nancy by Jane O’Connor (Harper Collins, 2005) – I feel bad starting the list with a non LGBTQ book that everyone already knows, but it’s alphabetical by title! This is great for celebrating dressing fancy and embracing your fanciest, poshest self.
I am Jazz by Jessica Herthel (Dial Books, 2014) – A little on the long side, but I love this picture book biography about a young transgender girl.
It’s Okay To Be Different* by Todd Parr (Little, Brown, 2001) – Todd Parr is a classic for a reason. His bright cheerful books teach great social emotional lessons.
Introducing Teddy: a gentle story about gender and friendship by Jess Walton (Bloomsbury, 2016) – Errol and Teddy are best friends, but Teddy is sad, will he be able to tell Errol why? And how will Errol feel about Teddy when he learns the truth? (Teddy is transgender)
Julián Is A Mermaid by Jessica Love (Candlewick, 2018) – Julián is fabulous. One day he sees some women on the subway who are even more fabulous. When he creates his own outfit, what will his Abuela (grandmother) think?
Jacob’s New Dress* by Sarah Hoffman (Albert Whitman, 2014) – Jacob wants to wear a dress to school, but when he makes one out of a towel he gets teased. Can his parents help him get a real dress? What will happen when he wears it to school. Introduces the term gender nonconforming.
Morris Micklewhite and the Tangerine Dress** by Christine Baldacchino (Grownwood Books, 2014) – Morris loves to wear the tangerine dress in the dress up center, sometimes the other kids laugh at him, but as you might imagine that is not the end of this story.
My Princess Boy by Cheryl Kilodavis (Aladdin, 2010) – Dyson is a little boy who loves to sparkle, wear a tiara while climbing trees, and dresses as often as jeans.
Princess Hair by Sharee Miller (Little, Brown, 2017) – A bright, cheerful, colorful celebration of black hair and all the beautiful ways it can be worn. (No LGBTQ themes, great on diversity, celebrating yourself, and being the princess/queen in your own life.)
Princess Truly in I Am Truly by Kelly Greenawalt (Orchid Books, 2017) – Truly is a remarkable little girl who can be an engineer, a princess, and is so strong she can roar like a lion. (No LGBTQ themes, great on self confidence and features a beautiful black girl)
Red: a crayon’s story* by Michael Hall (Greenwillow Books, 2015) –  when a blue crayon is labeled red at the factory, he has to stop trying to be red and learn to be who he really is.
Stella Brings the Family by Miriam B. Schiffer (Chronicle Books, 2015) – It is mother’s day and Stella who has two fathers is unsure who to bring as a special guest to school.
Teddy’s Favorite Toy** by Christian Trimmer (Athenum, 2018) – Teddy has lots of toys but his favorite is a doll that can dress up or do some awesome fighting. Has YAS QUEEN lines that the caused the audience to crack up. Less of a direct LGBTQ+ theme as much as just a boy playing with a doll, but the point of the story is actually the doll getting lost.
Worm Loves Worm** by J. J. Austrian  (Balzar + Bray, 2016) – worm marries worm and chooses which tradition to follow and which to discard, because who can decide which worm is a bride/groom? It doesn’t matter!
You’re Wearing That to School by Lynn Plourde (Disney Hyperion Books 2013) – when no one likes a hippos choice of first day of school outfits, will she be able to hold her own?

Will we do it again? YES! We are working on a schedule to do it 3 to 4 times a year. Our community clearly has a large group of people who enjoy it. And while we have received some more negative comments, the positives have vastly outweighed the negative. I’m glad to offer this to our community and show that the library is a welcoming place for all.

We marketed this toward families with young children, but had a lot of interest from adults and teens. And some fantastic teens showed up in their pride flags! (Because most drag shows are in bars, this is the only chance many teens get to see drag performers in person.) We are looking at utilizing a different space in the library that accommodates larger crowds and more mixed age crowds. One of the things that really helped was reaching out to Drag Queen Story Hour and some of our associates on Urban Libraries Council so we had copies of their press statements and some prepared remarks already in our toolbelt when we did get some negative comments. For us, Drag Queen Storytime is a celebration of creativity, expression, and inclusiveness in our community. It is one of our most successful programs. It isn’t an easy thing to do, but things that are worth doing are rarely easy to do.